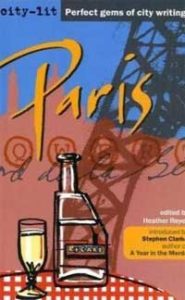 What is the best way to get under the skin of a city such as Paris?  Heather Reyes, editor  of a new anthology of writing on the city, says it is through reading what people have had to say about it.Paris is one of the most written about cities of the world. “There’s enough good writing for at least six anthologies,” says Reyes,..”I hope readers will find plenty to fall in love with in our word-portrait of this most alluring and complex of cities.”

Following is how Stehen Clarke  (bestselling author of “A Year in the Merde”) described the city in his hilarious introduction to the book:

Paris is not entirely unique. You can sit in cafés, wear designer clothes and even have sex in lots of other towns.

It just feels unique, as if everything you do, from buying underwear to chewing a hunk of baguette, is somehow more stylish because you’re doing it in Paris. Certainly Parisians act as if they’re unique – not as a community but each individual one of them. It is the city of moi. As they walk down the street they’re thinking, look at moi. Even when they’re kissing a friend on the cheeks, they’re saying it – moi, moi.

And the obsession driving each moi is its lifestyle. Parisians have elevated lifestyle to an art – no, more than an art, it is (as only the French can say properly) a raison d’être. In summer, they close off a whole chunk of the road running along the right bank of the Seine – the city’s main throughway – to create Paris Plages, a chain of imported beaches, riverside cafés, performance spaces, even pétanque pitches. Block a main inner-city artery so that people can play pétanque? Not many capitals would do that.

Similarly, the new Vélib scheme – cheap bike rental – was instantly adopted by Parisians as a chance to glide about the city looking stylish, as well as being a great new chat-up opportunity. “Bonjour, you have rented a Vélib? So have I, what a coincidence. Destiny has obviously decided that we must sleep together.”

Admittedly, this love of lifestyle does have its downside. As soon as the Vélibs were introduced, you saw impatient Parisians jostling around, trying to push in front of each other to get a bike. Because waiting is not part of their lifestyle. The person in front is preventing moi from being where moi really wants to be.

So when a chic Parisian office worker barged in front of me to get his Vélib, I knew that he wasn’t just being bad-mannered. No, he had an urgent appointment with himself and his lifestyle. It was probably imperative for him to go and sit outside a café before shutting himself away in the office. If he waited for me to fiddle around selecting my bike, he’d miss the chance to watch that new secretary walk past in her tight skirt. One of these mornings she is sure to notice him, and then who knows what will happen.

It is the city’s addiction to the moi-first lifestyle that has attracted writers to Paris for so many centuries. The average writer is, after all, even more egocentric than a Parisian. What’s more, Paris is the true home of the intellectual, a place where you can talk total arty-farty twaddle and, as long as you are passionate about it (and preferably squinting through a haze of cigarette smoke), people will actually take you seriously.

Fortunately, though, there have been plenty of brilliant writers either visiting Paris or living here, and the book you’re now holding is full of anything but twaddle, except perhaps for the samples of my own writing.

And what strikes me about reading Balzac, Flaubert, Orwell or de Beauvoir on Paris is how little the city changes. Superficially, yes – Balzac’s heroes didn’t have to battle their way onto a metro during a travel strike – but deep down things are always the same. There are still foreigners getting mistreated in swanky kitchens exactly as George Orwell was. You can still trip over Americans like Hemingway sitting with their litre of wine on the river bank. Even some of the streets in Hugo’s Notre-Dame de Paris are almost unchanged, and the darker ones can certainly smell pretty medieval on a Sunday morning before the cleaners come round.

My own first visit to Paris was inspired by a book – Zola’s Le Ventre de Paris (The Belly of Paris), a novel about the often unappetizing things that went on in the city’s food market at Les Halles. Being too hard up to buy a decent guidebook, I marched off in search of the market using only the free Galeries Lafayette map they give you at the railway station, and was disappointed to discover that the glass-framed market halls had been knocked down and replaced by a hideous shopping mall about twenty years earlier.

However, as I wandered away, deep in literary mourning, I stumbled into the rue Montorgeuil and was confronted with bloody hunks of horsemeat, skinned rabbits, live lobsters and heaps of pungent mushrooms with the soil still clinging to their roots. A boulangère had set up a stall in front of her shop and was gleefully handling money and bread while sneezing into her palm with a disregard for hygiene that would have brought out the bacteria police back home. I was in Zola’s novel.

These days, people moan that the area around the rue Montorgeuil has gone posh – there is now, for example, a trendy Japanese restaurant that does mango sushi. Merde alors. But Zola would recognize the epicureanism of a street where every other business is dedicated to food. And you can still buy a baguette that has been fondled by a baker’s dubious fingers. Mango sushi, OK, but polythene bags for baguettes? Non merci!

The area of Paris where I now live has many timeless qualities to it. It’s the Butte aux Cailles. A picturesque name, I thought when I first moved in – Quail Hill. But no, a friend explained that quail was an old word for prostitute. Apparently the hill used to be a prime cruising zone. And in a modern way, it still is. There’s a small gang of ladies who go round sticking massage ads on trees and lampposts. Hand-written, too. None of your new-fangled colour printing technology for these quails.

I often see people filling water bottles outside the Butte aux Cailles swimming pool. There is a spring beneath the hill, and a fountain where you can collect the water, free of charge. These days it is checked for purity, of course, but even so, it is a part of daily life that must go back hundred of years.

Nearby is the small local bookshop, which advertises an in-house “public writer”. No, not a resident author who will lecture you on the problems of the omniscient narrator – this is a person who writes your letters for you if you can’t spell too well yourself. What century are we in again?

And the wonderful thing is that none of this is done for tourists or because the state or UNESCO has provided a grant to ensure that future generations will always be able to witness ancient French folk customs. It is simply unchanging, everyday Paris.

There is, however, one quaint folk custom that is state-subsidized. Every year, generally in winter, the French government workers go on strike, and the nearby Place d’Italie comes alive with balloons, revolutionary songs and the fragrant odour of merguez sausages being cremated on barbecues. The atmosphere is usually very festive, with old friends meeting up and comparing banners. Last year, I went and interviewed some of them for a French TV programme, and the protesters were in a hearty mood despite the rain. I met a group of strikers from a suburb of Paris who were sitting out a shower in a café.

“How many times have you been on strike?” I asked one man.

He had a think and replied, “this year?”

Next I found a chanting Parisian social-security worker and interrupted him to ask about his all-time favourite strike or protest march. He consulted his colleagues and they decided that “it was last year, when we went to Brussels.” Yes, these demonstrations are such an integral part of their lifestyle that they even go on striking holidays.

So if you come to Paris hoping to visit some of the places mentioned in this book, and your trip is disrupted by a transport strike or protest marches, don’t be disheartened. It’s just one example of Paris imposing its lifestyle on you. All you can do is adopt the strategy I used with the Vélib queue-jumper – accept that c’est la vie and give a resigned Parisian shrug.

You don’t know how it’s done? It’s very simple. You put on a facial expression that says “what do I care, we’re all mere grains of sand in the infinite desert of the cosmos,”  you imagine that a pair of overweight parrots has settled on your shoulders, and then try to lift them six inches higher without tipping them off. Get practising before you visit Paris – it’s a key exercise in all the city’s yoga classes, so you’ll have some catching up to do.

STEPHEN CLARKE is the author of four novels set in France, including “A Year in the Merde,” as well as “Talk to the Snail,” a handbook for anyone wishing to get the best out of the French lifestyle.

In Paris buy the book at Shakespeare & Co and W H Smith or online at: Citi-lit: //www.oxygenbooks.co.uk/paris.htm