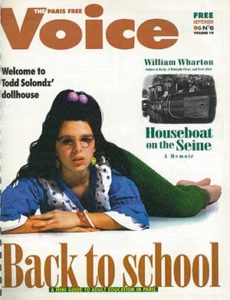 William Wharton is the pseudonym of a man whose life is one of the great success stories of expatriate living –  not that of the international public servant or manager sent to France on a lucrative contract, complete with apartment in the 16th arrondissement, but rather the success of the foreigner who comes here of his or her own accord, in search of a certain way of life or perhaps, as current idiom has it, to “get a life,” one wherein such archaic words as “freedom” and “identity” take precedence over more accepted terms such as “annual income” and “job security.”

END_OF_DOCUMENT_TOKEN_TO_BE_REPLACED

Think of Paris in the ’20s, and Josephine Baker clad in a belt of bananas and a few beads leaps to the mind’s eye: an exotic image of the legendary Josephine, who somehow managed to be not only a star of stage, screen and music hall, but also the recipient of the Croix de Guerre for her work in the French Resistance. What else do we know of her? Perhaps that she was as kind and talented as she was bad-tempered and ambitious; and that she was the adoptive mother of the “Rainbow Tribe,” a multiracial group of abandoned children that she amassed after the war.

END_OF_DOCUMENT_TOKEN_TO_BE_REPLACED

France Books, The Best of Enemies: Anglo-French Relations Since the Norman Conquest, by Robert Gibson

For over nine centuries now, the English and the French have maintained one of the greatest love-hate relationships of all time. They have fought countless bloody wars against one another and joined forces to wage war against others. As Robert Gibson points out, more Englishmen are buried on French soil than in any other land. However, “The Best of Enemies” is not, strictly speaking, a history book; nor yet another compendium of kings, queens, princes and battles, but rather a lucid study of nationalism and the emergence of two very distinct national identities. END_OF_DOCUMENT_TOKEN_TO_BE_REPLACED

Pierre Salinger was in town last month to promote his new book: “P.S. A Memoir,” published simultaneously in French and English. Happily, the event coincided with the 100th anniversary of Brentano’s bookstore, so the passage of some 30 million books and the publication of one new one were duly celebrated by a literary lunch at the Hotel Bristol on October 11, and an extremely successful book-signing at Brentano’s on the 14th. The dual publication is fitting for a man who has spent so much of his life in France and has been known to the French public as a kind of “voice of America” ever since he conducted a Kennedy press conference over 30 years ago and wowed the local press boys by addressing them in French.