Legendary photographer Henri Cartier-Bresson doesn’t like giving interviews. In fact, he doesn’t give them as such. If he does agree to meet you, it is on the condition that you don’t tape the conversation, you don’t make notes and you don’t even fire questions at him. “I prefer to have conversations,” he tells me. “Doing an interview is like being in front of a magistrate.”

END_OF_DOCUMENT_TOKEN_TO_BE_REPLACED

They’re red and made from plastic. Kenny Garrett holds them up. “Fourchette,” he says, “… Cuillère.” They arrived with his lunch, Chinese take-out, in the middle of an improvised French lesson that is taking place during a photo shoot scheduled just before our interview. Welcome to the busy world of the most promising alto saxophonist on the scene today. Garrett points to the photographer’s lens-shade. “Parapluie?” He sounds unconvinced. It’s the only time during our interview. For if Kenny Garrett is anything, it’s a man who knows what he wants.

END_OF_DOCUMENT_TOKEN_TO_BE_REPLACED

César’s Compressions, Expansions and giant thumbs have shocked and delighted art fans for years. He’s one of France’s most celebrated living sculptors and is having a king-size retrospective this summer at the Jeu de Paume. END_OF_DOCUMENT_TOKEN_TO_BE_REPLACED 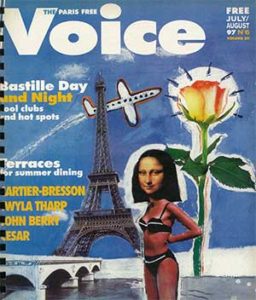 The joy of being a tourist anywhere is that the stimulation is constant and you get to lose your innocence all over again. You re-enter the child’s world of discovery, observation and fascination. And this begins with your very first moment in the new country. At the airport, even. Okay, let’s back up a few days. To the day you arrived in Paris.

END_OF_DOCUMENT_TOKEN_TO_BE_REPLACED

Twyla Tharp’s motor runs fast. Probably the most famous American modern dance-maker since Martha Graham, she can come off as brusque, even intimidating. Her spiky personality is partly the defense of an admittedly shy person. But it is also that she is so brainy, and so busy, that she can’t afford to suffer fools gladly.

END_OF_DOCUMENT_TOKEN_TO_BE_REPLACED

When the last decade of the 20th century witnessed the collapse of communism throughout the Soviet empire … , proletarian traditions lost their grip on the 11th arrondissement, the vanguard of French class struggle ever since 1789. As protesters march between place de la Nation, place de la République and place de la Bastille – the three cardinal points of working-class militancy – one is struck by the dramatic fall in their ranks. END_OF_DOCUMENT_TOKEN_TO_BE_REPLACED

When people learn that I have lived in France a little over two decades, the inevitable comment is “then you must have become French.” My spontaneous answer to that comment is “no.” But upon deeper reflection, I have to say that, while in many circumstances the cultural gap is, if anything, only greater, in others I feel that I have indeed become “almost” French.

END_OF_DOCUMENT_TOKEN_TO_BE_REPLACED

It is mid-June and I am talking to the noted Yiddish scholar Jean Mouton in a restaurant in Belleville. Actually, that sentence is designed to fool any FBI agents who may still be on the trail of McCarthy-era survivor John Berry, the actor and director who, after three months of dodging a HUAC subpoena, traded America for the City of Lights in late March 1950. END_OF_DOCUMENT_TOKEN_TO_BE_REPLACED

After a number of years in France there are a few odd things that you end up only knowing how to do only in French.  For example,  I can change the embrayage of my car with my eyes shut, but I cringe at the idea of touching the clutch. As a publisher, I know the ins and outs of brochage, but bookbinding totally befuddles me. I can poser une moquette or handle carrelage, but I’m lost when it comes to laying carpet or dealing with  bathroom tiles. In fact, on the whole I’m not too bad as bricoleurs go, but if it’s one thing I’m not it’s handy! END_OF_DOCUMENT_TOKEN_TO_BE_REPLACED 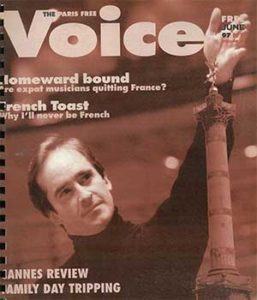 The Paris Opera on the Place de la Bastille is nearly as famous for political strife as the Bastille itself was. The high-tech, 2,700-seat opera house, opened in 1989 as part of the Mitterrand legacy, has witnessed power politics, frequent strikes and the firing of two music directors. When two years ago the new general director of the Opéra de Paris, Hugues Gall, selected an American, James Conlon, as principal conductor and musical adviser, the French press referred to Conlon as the “brave maestro.” Now, nearing the end of his first season, Conlon has not only managed to sail above the strife but has brought new life to the Opera. END_OF_DOCUMENT_TOKEN_TO_BE_REPLACED

My first bout with weight discrimination in France came while I was working as an illustrator for a now-defunct fashion house, Schiaparelli. Eyeing my tiny frame, the boutique director felt it her duty to warn, “Here, there are no 34s and certainly no 44s.” Okay, I could buy a size 36 and cut it down. But what do women tipping the other end of the scale do for clothes? Buy two dresses and stitch them together? END_OF_DOCUMENT_TOKEN_TO_BE_REPLACED