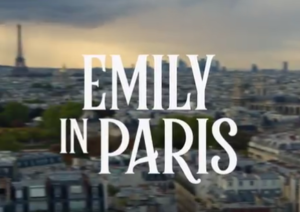 When the going gets tough in these pandemic times the tough get Netflix. “Emily in Paris,” updating the ever popular American in Paris story, premiered this month on Netflix with Lily Collins as the titular character moving to Paris for a new job with a French marketing firm. It already ranks among Netflix’s top ten! The rom-com, written and produced by Darren Star—whose previous hits include “Beverly Hills” and “Sex in the City” —follows Emily for ten episodes as she searches for love and struggles to achieve success in a French workplace while experiencing the usual franco-american culture clashes.

Predictably some French and European critics panned the series saying Paris is more than fashion, romance and croissants. Jon Henley of the Guardian said “Name a cliche about France and the French, you’ll find it in “Emily in Paris.”

Since most Americans are prohibited from flying to Paris during the pandemic a fantasy France will have to do until we get back to the real thing…. And like Audrey Hepburn’s often quoted character in the 1954 film “Sabrina” says: “Paris is always a good idea.”