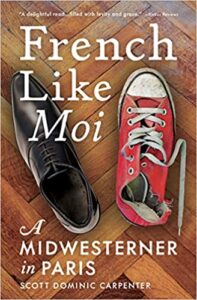 Scott Carpenter’s memoir “French Like Moi” revisits B.C Paris (before corona virus) with wit and humor. Carpenter, who teaches French literature at Minnesota’s Carleton College, tells a traveler’s tale that is both funny and full of cultural insights. His saga is sure to evoke a chuckle from anyone
who has spent some time in Paris. As the French might say, the book is… “très amusant.”

When Carpenter moves from Minnesota to Paris, little does he suspect the dramas that await: scheming neighbors, police denunciations, surly demonstrators, cooking disasters, medical mishaps―not to mention all those lectures about cheese! It turns out that nothing in the City of Light can be taken for granted, where even trips to the grocery store lead to adventure.

In “French Like Moi,” Carpenter guides us through the merry labyrinth of the everyday, one hilarious faux pas after another. Through it all, he keeps his eye on the central mystery of what makes the French French (and Midwesterners Mid).