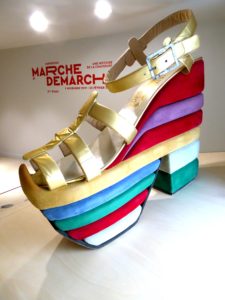 During the 16th century, royalty, such as Catherine de Medici or Mary I of England, started wearing high-heeled shoes to make them look taller or larger than life. By 1580, even men wore them… a person with wealth was often referred to as, “well-heeled.”

Following the success of La Mécanique des dessous (2013) and Tenue correcte exigée! (2017), the Musée des Arts Décoratifs continues its “fashion & body” theme with Marche et démarche, looking at the form, fashion and function of shoes from the Middle Ages until today (to March 22, 2020).

The subject of this exhibition arose from the study of one particular shoe within the museum’s collection, which belonged to Marie-Antoinette in 1792. Measuring just twenty-one centimeters in length and five centimeters in width, it seemed implausible that a thirty-seven-year old woman could have slipped her foot into such a tiny shoe. Research revealed that aristocratic women in the 18th century, and women of the haute bourgeoisie in the 19th century actually walked very little. Their restricted mobility was such that their shoes were in effect, not made for walking.

It also looks at the evolution of footwear for activities such as sports, dance, and military marching. Clown shoes and funny footwear belonging to Charlie Chaplin are displayed alongside “magical” shoes, such as the Greek god Hermes’ winged sandals or the folkloric seven-league boots. The exhibition closes with a selection of contemporary shoes with fantastical designs by designers such as Benoît Méléard, Noritaka Tatehana, Masaya Kushino, Alexander McQueen and Iris van Herpen.