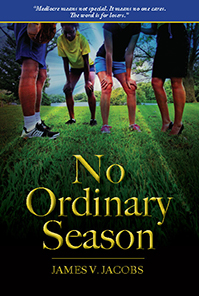 James Jacobs’ debut novel “No Ordinary Season” revisits life in small town America. A first impression could be this is just another coming of age book. It is much more than that. Appearing a century after Sinclair Lewis’ iconic “Main Street,” Jacobs’ book, situated in the fictional town of River Bend, Indiana, portrays a town with some of the provincial attitudes and prejudices of Lewis’ day.

Jacob’s, who worked in the Civil Rights Movement with Urban League affiliates in Indiana and taught school for many years, says he was inspired to write the book by his daughter, who was a runner when she was in high school. Although the novel is classified as young adult— like in “To Kill a Mocking Bird”— the life lessons are ageless.

Mystery writer Susan Van Kirk says “No Ordinary Season” is no ordinary young adult novel… It’s a wonderful story for both teenagers and adults. He has realistically captured the world of high school students with all their turmoil, disappointments, hopes and dreams. However, Jacobs has added a deeper dimension… What results is a story with an underlying narrative that gives it richness and depth… Its messages are very much needed in today’s world ”

The story is told through the eyes of Cassie Garnet, a teenage girl training for her high school cross country team. When a urbane Jewish woman is hired to teach chemistry and coach the women’s team tensions rise to the breaking point. Neither Cassie nor River Bend will be the same. With believable characters and a satisfying narrative arc—small minds are defeated and justice prevails—the book is a very good read.

More about the book: //www.fatherson.com/book_details.asp?id=26013