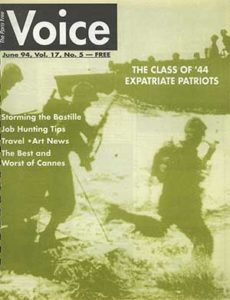 As May slips into June, the beaches and apple orchards of Normandy will play host to a kinder, gentler invasion than the Big One five decades ago that landed it a rock-solid place in the pages of world history. This time around, the tourists are coming, and the Normans are prepared for them: over 600 events are planned to commemorate the liberation of a war-ravaged Europe, which struck the shore like lightning on the morning of June 6, 1944.

END_OF_DOCUMENT_TOKEN_TO_BE_REPLACED

Jim Morrison ate his last meal at Le Beautreillis, a little restaurant near the Place de la Bastille in Paris.  What killed him remains murky but the authorities ruled out dinner, so cult followers have flocked to the place ever since.  A shrine it may be, but the restaurant serves up more than warmed-over memories.  The blini are terrific.  And so is the host, a genial Croatian named Verian.  He bought the place two years ago, serves honest Slav food, and says he doesn’t much care about the legend of “Jeem.”  But his black leather pants tell a different story.  So do the the luvmobile up the street and the heaps of Morrison memorabilia threatening to avalanche the restaurant’s side room.  But we’re getting ahead of ourselves. . .

END_OF_DOCUMENT_TOKEN_TO_BE_REPLACED

Grunge, pauperism, minimalism, hip hop and recoup’ (recycled salvaged looks), the styles most popular among young people today, all have one thing in common: their roots can be traced to the Japanese movement of the 1980s. With their strong, innovative shapes, high-tech fabrics and radically different fashion philosophy, Japan’s leading avant-garde designers are responsible for shaping the way an entire generation perceives modern style today.

END_OF_DOCUMENT_TOKEN_TO_BE_REPLACED

Misshapen beads of the unexpected snow dappled the floor around Mavis Gallant’s chair in the main room of the Select. She had shed her heavy coat and umbrella, and had ordered a coffee when a casually dressed young man approached from behind and tapped her shoulder apologetically.

END_OF_DOCUMENT_TOKEN_TO_BE_REPLACED

Every so often back in the ’30s, dark stretches of nighttime Paris would be lit by a sulfurous flash. Brassai was at work, taking pictures in which conventional beauty held little appeal. Like Toulouse-Lautrec, he was a well-born, highly trained visual artist who found inspiration in the down and dirty.

END_OF_DOCUMENT_TOKEN_TO_BE_REPLACED

Why would the Musée Rodin have another Camille Claudel show just seven years after they hosted her retrospective? Consider what followed on the heels of that exhibition – biographies, TV programs, traveling shows of Claudel’s work in the U.S., Japan and Germany, a 1988 film by Bruno Nuytten (now on videocassette), even a book of poetry written in Claudel’s voice and reprinted five times by Louisiana State University Press. Add to that the countless articles in which the Claudel/Rodin dispute has been tossed about by critics and scholars of nearly every persuasion. END_OF_DOCUMENT_TOKEN_TO_BE_REPLACED

Two little things happened recently in Paris that peaked my American glands: 1) Haagen Dazs infiltrated my local Prisunic and 2) I “dined” for the first time at Pizza Hut on the rue de Rivoli. Seemingly innocuous events, they nonetheless lent themselves to larger cultural scrutiny and psycho-existential re-positioning. The entrepreneur in me spotted the need for a culinary guide for the French, on American Popular Eats. The purist in me wretched. The menu of details before me read with the cultural differences of our two lands. END_OF_DOCUMENT_TOKEN_TO_BE_REPLACED 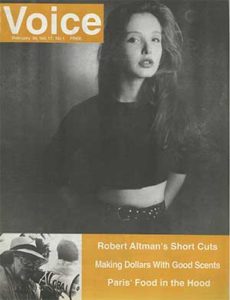 On the inside cover of a popular women’s magazine is a picture of a corked perfume bottle bearing Yves Saint Laurent’s name and a slogan, “Its name was forbidden, but women will know to ask for it.” The ad is for the controversial perfume “Champagne,” which after a lawsuit won by the wine producers of one of France’s most famous regions, was forced to change its marketing strategy as well as its label. However, by the time the smoke had cleared from the court battlegrounds, the fragrance appeared to be somewhat a winner, racking up 200 million francs in sales in just three months of existence. In an industry built around dreams, fantasies and image, nothing beats a little scandal to stir up interest and sales.

END_OF_DOCUMENT_TOKEN_TO_BE_REPLACED

The last public appearance Raymond Carver made in Paris was on one of those mythic, all too rare sweltering spring nights.  He was reading at Odile Hellier’s Village Voice bookstore, along with Richard Ford and Jonathan Rabin, with Edmund White on hand to introduce them all. END_OF_DOCUMENT_TOKEN_TO_BE_REPLACED

Unless you’ve spent the last decade meditating in a Buddhist monastery in Tibet, far away from the reachings of the French and international press, you absolutely must know what’s happening in Greater Metropolitan Paris on April 12, 1992.

END_OF_DOCUMENT_TOKEN_TO_BE_REPLACED 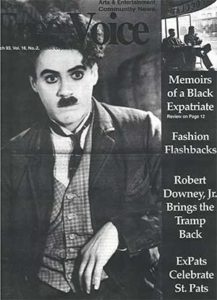 I don’t know if any of you have noticed, but in the year since starting this column, I’ve written on all sorts of fashion-related topics except for…what’s in style. This month I’m breaking my silence. So some of you may want to quickly turn the page before this article makes you feel too old or just plain out of it.