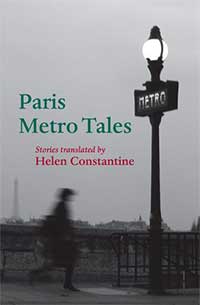 Helen Constantine’s  “Paris Metro Tales” offers 22 remarkable short stories set throughout Paris—all connected by the underground tunnels of its famed Metro. The journey begins at the Gare du Nord, stops at 20 underground stations along the way, and ends at Lamarck-Caulaincourt, each story corresponding to one of the 20 arrondissements of Paris.

Readers are invited to find their way through the underground, changing trains when necessary and imaginatively emerging to read a story in its original setting. The stories range from the 15th-century account of the miraculous Saint Genevieve, patron saint of Paris, through tales by popular writers such as Zola, Simenon, Balzac, and Maupassant.

Though connected by the metro, the subjects of these short stories vary widely: from Martine Delerm’s gripping narrative of the last hours of Modigliani’s mistress to Gérard de Nerval’s rich evocation of the bustling market in Les Halles in the 1850s, Colette’s unlikely involvement in a traffic accident near the Opéra, and Boulanger’s description of a blackly funny experience in Père Lachaise.