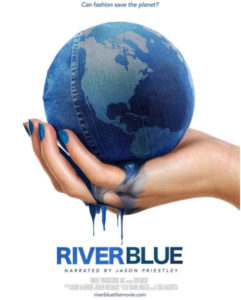 The documentary film River Blue asks the question “Can fashion save the planet?” The film follows river conservationist Mark Angelo as he chronicles some of world’s most polluted rivers. Along the way we discover the dark secret of the fashion industry while seeing some of the toxic side effects of textile production and jean manufacturing. Traveling from tanneries along rivers in India, to some of the largest jean manufacturing factories in China Angelo guides us on a journey through the environmental effects of toxic fashions.

The title of the film “RiverBlue” refers to the color of the water when blue jeans are being manufactured. A GreenPeace article “The dirty secret behind jeans and bras” quoted a Guizhou worker who said: “The water is discharged from the dyeing factories upstream. Sometimes it smells really awful. And every time the color of the water is different – I’ve seen every color imaginable.”

Although the film focuses on polluted rivers in China and India it stresses that this is a world problem and that to solve it consumers everywhere must start asking where and how their clothes are made and demand producers to clean up their act. In an interview with the Vancouver Sun, Angelo said: “our journey also reinforced my long held belief that, from an environmental perspective, everything is interconnected – and when toxins released from a riverside Asian textile mill end up in the tissue of a North American polar bear, one can’t help but appreciate these are issues we should all care about regardless of where we live.”

So will fashion save the planet? The film ends on a cautiously hopeful note showing new cleaner textile technology waiting to be adopted by the fashion industry. The subtitle of the film echoes that hope… “through awareness we evolve.”

For those interested in detoxing their fashion check out Greenpeace. Since 2011 their detox campaign has challenged some of the world’s most popular clothing brands to eliminate releases of hazardous chemicals.