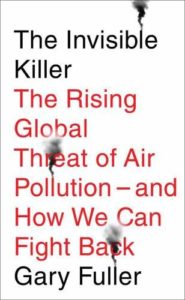 A new book by pollution scientist Dr Gary Fuller “The Invisible Killer, the rising global threat of air pollution… and how we can fight back” examines air pollution past and present while revealing the global magnitude of the pollution problem from London to Beijing to Los Angeles.

Fuller begins by introducing readers to diarist and gardener John Evelyn who wrote an essay “Fumifugium” (in 1661) criticizing London’s air pollution which he sent to king Charles II urging action. The book revisits the work of several early air quality researchers. We learn for example that in 1876 Ozone was measured daily for thirty-four years at the Observatoire de Montsouris, then on the outskirts of Paris. One hundred years later two German scientists measured the Paris air again and found that the Ozone level had doubled. From the great 1952 London smog to acid rain to the July 1943 Los Angeles smog attack “The Invisible Killer” examines the twentieth-century quest to assess the damage to our air in a search for solutions.

The world’s urban population is set to double in forty years, but the function and structures of new cities will be determined in the next twenty years says Fuller. “We must recognize our air as a precious resource that needs to be protected and not used as a waste disposal mechanism. It therefore falls to each of us to act where we can…to change the future of our planet and collective global health, city and national government action is essential. It is not for lack of evidence that air pollution harm persists. Instead it remains in place due to a lack of political will to make changes to our urban lives, to persuade the public and to make polluters bear the full cost of the harm that they do.”

“The Invisible Killer, the rising global threat of air pollution… and how we can fight back,” published by Melville House, UK