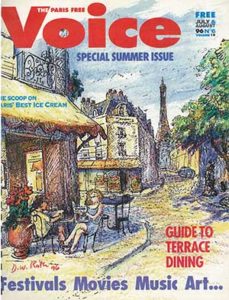 This summer take the time to discover some of Paris’ hidden art treasures. For adventurous spirits the rarefied atmosphere of well-known artists’ studios, now open to the public, can’t be beat. The following suggestions will take you off the beaten track to some interesting homes and studios where famous artists once lived and worked.

Although the Musée Rodin and the house of Symbolist painter Gustauve Moreau are perhaps the most frequently visited “artists’ home museums,” the museum created for Rodin’s former student and assistant Antoine Bourdelle deserves equal mention. The great Rodin himself once said of his erstwhile assistant, “There are men and artists whose names should be known. Bourdelle is among them. He lights the way to the future.” This jewel of a museum was recently renovated, and does a fine job of opening the artist’s former studio space to the public. The best news is that despite its convenient Montparnasse location, it is somehow out of the way, and not swarming with visitors.

Bourdelle moved into what was then the Impasse du Maine in 1885 and worked there until his death in 1929. Some 20 years later, through the efforts of his wife and daughter, his private home became a public museum with large exhibition halls to showcase his monumental bronze sculptures and plaster models. Several outdoor sculpture gardens and Bourdelle’s original studio add to the charm of this special museum.

The furnishings have scarcely changed; the long table and paneling are just as they were when the artist carved his reliefs for the Théâtre des Champs-Elysées.

These decorative friezes were directly inspired by the American dancer Isadora Duncan. In 1913, Bourdelle wrote: “All my muses in the theater represent the gestures of Isadora in her soaring interpretation of movement. She was my main source. Every impetus and every posture remained in my memory like flashes of lightening.”

Several large open spaces set off bronze equestrian figures of monumental proportions, while more intimate rooms house Bourdelle’s eclectic personal collection and some 6,000 drawings. A research library is available to scholars wishing to consult the wealth of documents conserved since the beginning of Bourdelle’s career.

After Bourdelle’s death, a number of devoted students continued to pass on his teachings. His daughter, Rhodia Dufet-Bourdelle, speaks fondly of the next generation of artists being taught by her father’s students, calling them “Bourdelle’s grandchildren.” The sculptor was known to say, “You must sing your own song,” encouraging young artists to discover their own forms of expression. His message continues through the museum and the prestigious Bourdelle Prize, created to honor a sculptor whose talent exceeds his fame.

Musée Bourdelle, 16, rue Antoine Bourdelle, 15e, Mº Montparnasse, tel: 45.48.67.27. Daily 10am to 5:40pm, closed Mon and holidays.
The late 19th century house in which the Russian sculptor Ossip Zadkine lived and worked was turned into a museum in April 1982. The sculpture installation in the pleasant garden has altered very little since Zadkine’s death. A number of large bronzes are exhibited, together with several stone sculptures, including the exquisite two-faced “Femme a l’Oiseau” from 1930.

This fine collection spans the artist’s entire career, from 1908 through 1967, and includes a wide range of influences, from Primitivism to Cubism and highly geometric compositions. There are some fine examples of Zadkine’s grouped figures. While most 20th century sculptors have produced mainly isolated figures, he frequently portrayed groups. “Les Trois Graces” and “Trio Musical” from the 1920s mark a transition from the earlier Cubist period toward a unique expression based on complex linear harmonies.

Although the artist’s atelier was transformed to allow a large number of works to be on permanent exhibit, there is still a very personal feel to this small museum. The Zadkine archives are accessible by appointment. Lecture tours are available upon request, as well as individual tours for the visually handicapped.

The exotic decor of the Musée National Jean-Jacques Henner is a perfect setting for the large collection of paintings and drawings by this celebrated Second Empire artist. Although Henner never lived in the fine building that now houses the collection, the profusion of sketches, documents and souvenirs reveals a great deal about the man. The museum director, Georges Cheyssial, has created an unusual environment in which to discover the artist’s entire life work.

In many cases, the multitude of sketches and studies done at every stage are on view with the finished painting, along with texts written by the major critics of the day.

Four floors of exhibition space within the large house permit a detailed presentation of the artist’s evolution. In one room, the artist’s last work, “Atala,” is displayed together with one of his early self-portraits. Henner excelled at portraits. There are more than 130 in the collection, along with his treatments of mythical themes and figures in dream landscapes that verge on Symbolism. A superb museum to discover on a leisurely Sunday afternoon.

Musée Jean-Jacques Henner, 43, av de Villiers, 17e, Mº Malesherbes, tel: 47.63 42 73. Daily 10am to noon and 2-5pm, closed Mon.
The streetfront entrance does not publicize the presence of the Jean Dubuffet Foundation. However, once one is inside the courtyard, a flower-bordered walk leads through a peaceful country garden to the charming private house that was once Dubuffet’s studio. During the late ’60s the artist also stored his private collection of Art Brut in the building before donating more than 5,000 pieces to the museum in Lausanne where these astounding works of “outsider art” can be seen today.

Changing exhibitions showcase different periods of Dubuffet’s long career. The foundation’s impressive collection includes over 1,000 works by Dubuffet, as well as the artist’s personal archives, which are open to scholars upon request. The exhibitions include paintings, drawings, small-scale models and sculpture. Rarely seen examples of Dubuffet’s early academic work are on view, notably “Lili,” a portrait of the artist’s wife. His 12-year “Hourloup” period of gestural, graffiti-like figures is always well-represented.

Dubuffet’s controversial work and writings are still a dynamic force in the international art world 10 years after his death. The artist’s essays and about 40 volumes that catalog his work and writings concerning each period have been published by the foundation. There is always much to see, so be sure to give yourself time to linger. This special house quickly casts a spell on visitors.