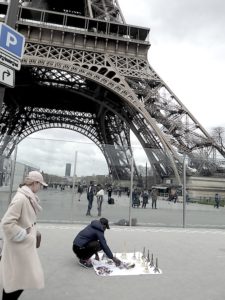 We’ll always have Paris. But if Bogart’s character in Casablanca came back to the city today he would be shocked to see some of the changes… par exemple the Eiffel Tower set off behind a three meter bullet proof transparent glass security wall.

The enclosure was designed by the Paris-based Austrian architect Dietmar Feichtinger, who also designed the Simone-de-Beauvoir bridge in Paris and the access way to the Mont-Saint-Michel. In an interview with France 24 Feichtinger said “It’s very important to keep transparency… to keep the site open as part of the project. I have designed the grille to incorporate the design of the Eiffel Tower. It’s more an installation in a garden that prevents people from climbing over or reaching through.”

After a dip in visitors due to terrorist attacks in 2015 and 2016 nearly 18 million tourists visited the city and Ile de France in 2018. Despite being surrounded by a “big beautiful wall” a la francaise, today it’s business as usual at the Eiffel Tower with nearly 7 million visitors last year (up from 5,934,000 in 2016). The iconic tower has been visited by over 300 million people since it opened in 1889.