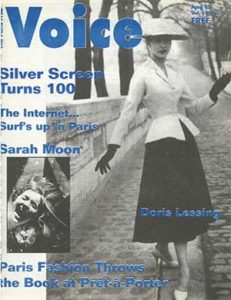 The chance is on now through May 15 at the Centre Nationale de la Photographie, where a retrospective highlights her commissioned and personally pursued work from the past 20 years. These 150 prints demonstrate the full range of Moon’s talent. In her professional portfolio, fantasy, nostalgia and melancholy are undercurrents, lending richness and force to her pictures. In her personal photographs, they are subjects unto themselves, making for remarkable images.

Anyone who has opened a fashion magazine in recent years is likely to have seen Moon’s work, most notably that for the Cacharel perfume Anaïs Anaïs. She also shoots editorial features for Vogue, Marie-Claire and others; has directed commercials and short films; has even illustrated a John Deere annual report. In addition to three published collections and 20 exhibitions, she has garnered nearly all the top awards available to commercial photographers.

In his introduction to the collection “Vrai Semblants,” Daniele Sallénave indicates why: “These are little tales she photographs or films-tiny stories, small dramas. Her world is not just that of fashion, but that of fiction and the imagination.” While this is equally true of Helmut Newton and other specialists in stories-within-a-frame, Moon’s impulse is not sex but nostalgia. According to Photographies magazine, she “leads us to our memories of childhood emotions.” This is an excellent qualification for a photographer of fashion, who must convincingly, and consistently, evoke clothing as raiment, makeup as magic and models as flawless princesses. Moon does so brilliantly in the large-format color prints that line the hallway gallery, selected from her fashion editorial work.

When clothing is not the key element of a picture, the storytelling elements can grow stronger still. For invitations to events held by Cacharel, Moon took a series of pictures that seem directly inspired by children’s fantasies. Some are enchanted, as where a lion stands guard alongside a wardrobe, or a goose fluffs out its feathers in a salon. The magic of these pictures emanates from the accompanying children-from their utter belief that the animals belong at their side. Moon recognizes, though, that children’s fantasies do not always have happy endings. One invitation shows a kicking woman in the clutches of a giant sewing machine-a fashion victim right out of the brothers Grimm.

In Moon’s personal work, which figures prominently in the show, the darker strain of nature often predominates, resulting in pictures fantastic and nightmarish. Especially haunting here are those that capture an elephant, a porcupine, a flock of birds – the subjects framed, lighted and printed in such a way that the creatures are unworldly, almost primordial. Like a young child, Moon has an ability to envision scary aspects of even the most innocuous subjects. In, for example, “Villandry,” tree branches seem to form a gauntlet of fists, ready to strike the unsuspecting passerby.  “Hochzeit,” depicting a newlywed couple in a joyful embrace, is the most spontaneous, exuberant picture in the exhibition, yet in its shadows and in the compression of elements within the frame, there’s a decided hint of foreboding.

Many of these prints have a ghostly quality resulting from the blurred registration of the image on film; the model has moved before the photographer’s slow shutter. Adding to the effect are faint but elaborate swipes, bloom, specks, and fingerprints purposely imposed on the surfaces. Sometimes these marks relate to the image – in one case a gorgeous old pear tree’s branches are echoed in a dendrite of emulsion – other times they are simply an alluring veil. These flaws serve both to “antique” and slightly obscure the scene, contributing to the otherworldly air.

Moon is a ready manipulator of developing film, and, according to Sallénave, she meticulously sets up her fashion shots. But when it comes to actually taking the picture she is, by her own charming account, passive: “The model only has one place – I look for mine – I don’t find it, they wait – I don’t want to be there any more – I continue… The model slowly moves – she proposes – she tries to understand what I can’t explain – she tries to play a role that I don’t get – I hear myself saying – no – no don’t do anything. So she waits again…she sees my panic…I don’t want to take pictures anymore – but I keep going and then, suddenly – not always but sometimes – something happens – something changes – I never know why, maybe I’m just in the right place at the right time…suddenly I’m carried away.”

Sarah Moon began to take pictures after she left fashion modeling. At the beginning of her career, she was virtually the only woman in the field – even today, despite the success of others like Ellen von Unwirth and Sheila Metzner, women fashion photographers remain the exception. Moon’s role as a pathbreaker is important to note, but her most significant achievements stand apart from her gender. When she gets carried away, so do we; her haunting images capture the world in an indelible fashion.