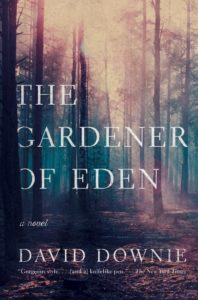 A mysterious beachcomber, in “The Gardener of Eden,” appears one day on the coastal bluffs near the small town of Carverville, a place whose best days are long behind it. Who is he, and why has he returned after nearly forty years? The book is Paris-based author David Downie’s haunting, luminous novel set in a mythical Pacific Coast locale somewhere in Northern California.

Downie, a native San Franciscan, has lived in Paris for 33 years and written half a dozen books about the city and France. But he grew up spending summers in the Sierra Nevada mountains of California and later lived for a month each year for 20 years in the outback of the state’s famous—or notorious—Mendocino County. This chilling yet lyrical page-turner explores the dark secrets lurking beneath the stunning natural beauty of Carverville, a dying timber town where undesirables disappear, the county sheriff is a Trumpian totalitarian and sadist, and the protagonist, James, returning home after many years, finds himself caught up in a web of corruption, lust, incest and murder.

Downie weaves an intricate and compelling narrative of redemption, revenge, justice, and love―and the price of secrecy―as a community grapples with its tortured past and frightening future. If Alfred Hitchcock were alive today, he would make the movie.

He is on book tour in March in the USA (SF Bay Area, Santa Cruz, Sonoma, NYC, Charlottesville, Washington DC) then will do several events in Paris in the spring (check with The Red Wheelbarrow and The American Library in Paris for details). His recent books include: “Paris, Paris: Journey into the City of Light,” “Paris to the Pyrenees: A Skeptic Pilgrim Walks the way of Saint James,” “A Passion for Paris: Romanticism and Romance in the City of Light” and A “Taste of Paris: A History of the Parisian Love Affair with Food.”