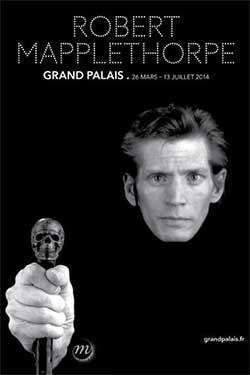 Back in 1989 Robert Mapplethorpe’s photography exhibition “A Perfect Moment” was cancelled by the Corcoran Gallery in Washington due to pressure from conservative politicians. His homo-erotic and S&M pictures at the time fueled a national debate over public funding for the arts. Some of these controversial pictures and approximately 200 other images spanning his career from the early 1970’s until his death at 42 of AIDS are currently part of a large retrospective of his work exhibited at Paris’ Grand Palais .

Mapplethorpe was an artist with an obsessive quest for aesthetic perfection. A sculptor at heart and like Man Ray he wanted “people to see his works first as art and second as photography.” (The exhibition includes a couple of his sculptures). In an interview with Janet Kardon Mapplethorpe said “If I had been born one hundred or two hundred years ago, I might have been a sculptor, but photography is a very quick way to see, to make sculpture.” An admirer of Michelangelo, Mapplethorpe’s photos updated the classical ideal for the libertine New York scene of the 70’s.

The exhibition opens with his iconic self-portrait with a skull-headed cane. It includes portraits, still life pictures, male and female nudes as well as his legendary homo-erotic photographs. A video he made with Patty Smith is pure poetry. The exhibition concludes with a look at some of his first Polaroids demonstrating that his signature photographic style was evident from his earliest work. In addition to revisiting the work of an important American photographer the exhibition is a trip back to the late seventies arty New York scene with pictures of such emblematic figures as Patti Smith, Iggy Pop, Lisa Lyon, Grace Jones, Andy Warhol…

Robert Mapplethorpe at the Grand Palais until July 13, 2014