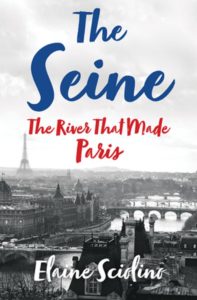 “The Seine is the most romantic river in the world. She encourages us to dream, to linger, to flirt, to fall in love…” says Elaine Sciolino author of “The Seine, The River That Made Paris.” A melange of historical vignettes, personal antidotes and poetic quotes spiced with photos and illustrations, this charming book is both informative and entertaining.

Sciolino recalls that strolling along the Seine was one of the joys of being in Paris when she first moved here many years ago as a young journalist. “I decided the time had finally come to explore a river I loved but knew only superficially. During much of my time living in France, I wandered along only part of its eight-mile stretch in Paris.”

“In writing this book, I traveled from the source of the Seine in deep Burgundy, to the estuary where its waters meet the sea, and to cities, towns, tributaries, islands, ports, and bridges in between. The result is a deeply personal book shaped by my impressions of life on the river. I have told the stories that resonated with me and shared encounters with people whose lives touched me.”

The book explores the Seine through its rich history and lively characters: a barge-woman, a riverbank bookseller, a houseboat dweller, a famous cinematographer known for capturing the river’s light. Sciolino discovers the story of Sequana―the Gallo-Roman healing goddess who gave the Seine its name―and follows the river through Paris, where it helped shape the city’s destiny.

Former New York Times Paris bureau chief Elaine Sciolino has been based in France since 2002. She is the author of “The Only Street in Paris: Life on the Rue des Martyrs”, “La Seduction: How the French Play the Game of Life,” “Persian Mirrors: The Elusive Face of Iran,” and “The Outlaw State: Saddam Hussein’s Quest for Power and the Gulf Crisis.”