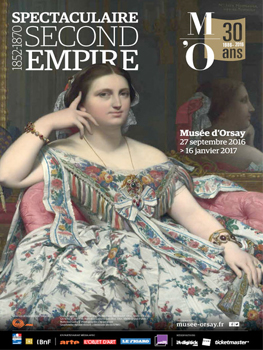 A major exhibition—”Spectaculaire Second Empire, 1852-1870″— at the Musee d’Orsay celebrates the museum’s 30th anniversary (to January 15, 2017). It revisits a time when France was at its zenith with paintings, sculptures, photographs, architectural drawings, objets d’art and jewels depicting a brilliant era rich in contradictions.

The Second French Empire corresponds with the reign of Emperor Napoleon III (1852-1870)). Paris was the largest city in continental Europe and the center for finance, fashion and the arts. Beginning in 1853 Napoleon III and his prefect Georges-Eugene Haussaman, over the course of seventeen years, completely rebuilt the heart of the city, creating new boulevards its famous parks and train stations, giving the city its present appearance. In addition, Napoleon III completed the Louvre, built five new theaters and commissioned the Palais Garnier Paris Opera.

It was also a time of glittering fetes. Balls and the theater were the major social events for Parisians during the Second Empire. The most prestigious of all were the balls held at the Tuileries Palace by the Emperor Napoleon III and the Empress Eugenie. During carnival there were a series of very elaborate costume balls. By the end of the Second Empire, Paris had forty-one theaters staging everything from grand opera and ballet to dramas to melodramas.

The exhibition revisits Paris’ art scene with paintings from the 1863 “Salon des Refusés” including Manet’s sensational “Déjeuner sur l’herbe.” Championed by the Emperor and supported by major French industrialists, the Universal exhibitions held in Paris in 1855 and 1867 showcased the prosperity of the Empire. In 1867, the exhibition extended onto the Champs de Mars and welcomed a record eleven million visitors. Several masterpieces are included in the exhibition from the Musée des Arts Decoratifs’ collection.

The era came to end with Franco-Prussian War in July 1870 when the French army was defeated; Napoleon III was captured and deposed by the French parliament, which proclaimed the French Third Republic.