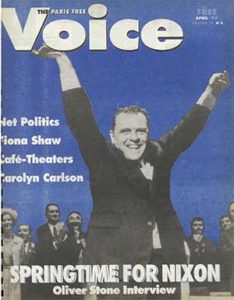 Oliver Stone is on the campaign trail: a one-day stop in Paris in late February, en route from Berlin, where “Nixon” was shown in competition at the film festival, before returning to America, where the film received four Oscar nominations. Stone, who speaks fluent French, has more than casual ties to France. His parents met in Paris when his father, Lou, was stationed here as a GI. Stone often credits his initial love of film to his French mother, Jacqueline, an avid moviegoer.

An only child, he was devastated by the divorce of his Jewish-American father and his Catholic-French mother, when he was 16. After a year at Yale, Stone dropped out in 1965 and headed to Southeast Asia, where he taught English to Chinese-Vietnamese students in a Saigon suburb. Soon thereafter he returned to Vietnam as an enlistee infantryman, who would be twice wounded and decorated. Stone’s 15 months of service involved intensive combat and equally intensive drug use. In 1987 Stone said, “I walked away from that war, 21 and benumbed, and something of an anarchist. It took me several years to recover some form of social identification.”

On the GI Bill, Stone attended the film program at NYU, where his teachers included Martin Scorsese. Stone liked the creative bent of European films, particularly those from France and Italy. Following film school, he drove a cab, got married, took more drugs and struggled with his writing until his professional breakthrough, the screenplay for “Midnight Express,” at age 32. Ever since then, Stone, who turns 50 in September, has been forging a bold if uneven body of work – in recognition of which he received his own star on Hollywood Boulevard last month.

Nobody does the ’60s on film better than Stone, whether it’s the sweeping mood of “Born on the Fourth of July,” the concert sequences in “The Doors,” the body language on that fateful day in Dealy Plaza in “JFK” or the careening grocery store visit when Tommy Lee Jones comes back from Vietnam in “Heaven and Earth.” As far as Stone is concerned, “the ’60s” stretched from 1963 to 1973, bracketed by the Kennedy assassination and Nixon’s departure from office in disgrace.

A French journalist accosts Stone at the Plaza Athenée: “What have you got against Nixon? What did he ever do to you?” Stone, who is as calm and well spoken as his films are sometimes flamboyant and didactic, is tired but amused. “It’s funny, but in the US people thought I was way too soft on him. Way too kind. Nixon is really hated over there.”

No kidding. When a Nixon commemorative postage stamp was issued in the US last year, the Chicago Tribune quoted a man who said he would rather hand deliver his out-of-state letters himself. (According to the US Postal Service, the stamp was a feeble seller. When the print run is exhausted, we won’t have Nixon to lick around anymore.)

“Nixon” examines its subject’s life through 1973, using the Watergate break-in as a narrative fulcrum. While it is substantially more sedate than the freewheeling “JFK,” Stone (aided and abetted by an outstanding cast) applies his fair share of baroque touches, such as the ominous lightning-wracked sky and eerie horror movie music that accompany our first glimpse of the White House.

Satirical singer-songwriter Tom Lehrer announced that his work had become redundant when Henry Kissinger was awarded the Nobel Peace Prize. Oliver Stone believes, with a vengeance, that it’s worth tackling the ironies and consequences of 20th century history. His Nixon, Anthony Hopkins – in a pitch- and posture-perfect performance – announces, “Nixon was born to do this – give history a nudge.” Stone, who may well have been born to chronicle some salient features of his own time, made the following remarks while in Paris. (“Nixon” was released in France on March 20.)

Free Voice: How would you sum up Richard Nixon?

Stone: He was a monster. A grotesque. We went the other way – we tried, as dramatists, to empathize with him and to walk in his shoes. One of the ways I tried to do that was to identify him with my father, who came from that generation. Very stubborn. Never wrong. For me, for most of the public, Nixon was a man who lied his whole life. I don’t think he did it out of malice. He thought he was a good guy. He’s such an important figure. He dominates 50 years of American history. The New Right of today we owe to him. Bob Dole, George Bush, Newt Gingrich are his progeny – all Nixon men.

Q: What was the chronology of the project vis-a-vis Nixon’s death?

A: We started the screenplay before he died. When he died, we accelerated the process. We did a LOT of research. Nixon may be the most documented man of our time. The screenplay is an historical drama based on research and intuition.

Q: Nixon is generally admired outside his own country, very highly thought of for his statecraft. Why do Americans have a blind spot about that?

A: I think the power of the presidency is limited. We used the metaphor of “the beast”, which stands for what Eisenhower called the military-industrial complex: Wall Street, the CIA, the Mafia. If you challenge the beast, you GO. Kennedy was killed because of it, I believe. And Nixon – through détente with China, contact with the Soviet Union, peace in Vietnam – pissed off the beast.

America is about the dream of success. Every American dreams of having money, power and success. But most Americans fail. That’s why I think Nixon emblemizes the ordinary man. Kennedy was mythologized as success, as Camelot. Nixon is failure. I think of him in terms of Willy Loman in “Death of a Salesman.” That’s why I used the sales film at the beginning – Nixon as salesman.

Q: You’ve gotten a lot of flack for the Lincoln Memorial scene [in which the president, virtually unaccompanied, has an impromptu chat with unkempt but idealistic youths loitering at honest Abe’s massive marble feet and an unusually well-spoken waif entreats him to stop the war]. Is that a true incident or an allegory?

A: It really happened at 4 AM in May of that year [1970] and I think it’s a great story. He was supposed to be a little drunk, by the way. It shows a Nixon who was vulnerable, trying to reach out. The actual talk was about football, surfing and a little bit about the war. But I wanted to use that scene to make my point about the system. [That this scene, grounded in fact, struck some as ludicrous only proves how smoothly the rest of the film is knit together.]

Q: Why the psychoanalytic emphasis on his strong Quaker mother and the deaths of his two brothers?

A: We will never know what made the man tick. When Nixon was alive people would say “Who IS Richard Nixon? What mask is he wearing today?” We do know that two of his brothers died young. And I’ve heard that those two brothers were very charismatic, like the Kennedys. My intuition tells me that as the least loved child he became an overachiever. I believe his mother loved him with conditions. He wrote a letter to her that he signed “Your faithful dog.” So I believe that his emotions were twisted by his childhood. His mother’s ideals were the complete opposite of his behavior, which was cynical. By the time you get to the deaths of the two Kennedy brothers, he feels guilt. If Bobby Kennedy had run in 1986, he would have been president and not Richard Nixon. His whole life he tried to overcompensate.

Q: What do you say to Kissinger, who says that your sources were marginal?

A: It’s true that Kissinger was the only one that Nixon did not overthrow or betray. Kissinger is fighting for his place in history. Several books have depicted him as a scoundrel. Can we believe Henry Kissinger? I think part of the power of “JFK” and “Nixon” is that they question history – who’s telling the story? Kissinger’s paranoia led to the dirty tricks unit, led to Watergate. Henry Kissinger has a lot to answer for and he hasn’t been honest – yet. In a way, he’s a lot like Richard Nixon.

Q: Why are you just about the only American director to tackle political subjects?

A: First of all, you have to be interested in it: current affairs and politics. I admire Costa-Gavras very much. When I was a film student I thought he was out there and doing it and taking on the world. I wish there were more. In the US the political press – many of whom are conservative – are very territorial and they resent dramatists and filmmakers taking on “their” subjects and entering the arena.

I used the power I had from “JFK” – which was an enormous success – to make “Nixon.” I used that marker and I’m very pleased. I don’t have to make another political film.

Q: How did your personal perception of Nixon evolve over the years?

A: As a young man I was supporting Eisenhower and Nixon with my father – I was 14 years old. Later I wanted him to end the Vietnam War. Watergate compounded his problems. He was personalizing the presidency. It was not about America, it was about Richard Nixon trashing the office. By the time he died in ’94 it was shocking to see that the press was forgetting his past and treating him as an elder statesman. So I decided I would do an intense psychological portrait. I didn’t want to make a polemical film.

It’s a freefall through American history. It’s intensely subjective. Our models are more Eisenstein or Welles. It’s a character puzzle, where the pieces come together at the end.

Q: How was the film received in the US?

A: It was attacked politically and polemically when it’s essentially an emotional portrait – a film on its own terms that will stand the test of time. I’m disappointed that kids aren’t interested in Nixon. That’s the fault of the schools.

Q: Do you see an emerging politician who could set things right?

A: That’s not possible now. There’s a totalitarianism on a global scale. I don’t believe any single leader could change the monetary structure that rules the world. You can be a local leader, that’s about it.