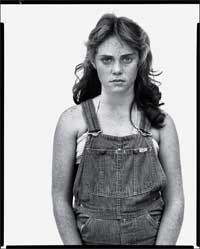 Sandra Bennett,  from “In the American West” Richard Avedon, © 2008

A major retrospective of photographs taken by Richard Avedon from 1946 until his death in 2004 is exhibited this summer in Paris at the Jeu de Paume. It traces the photographer’s carrer  begininng with his early fashion work with Harper’s Bazaar in 1945 which revolutionized fashion photography by bringing models out of the studios and into the streets giving the impression that the pictures were intimate moments captured spontaneously.

Avedon was part of a wave of American Photographers who came to Paris  after WWII to photograph the European fashion collections. He  regularly photographed the designs of major Parisian couture houses through to 1984. Among the photos exhibited from this Period is “”Dovima with Elephants” (1955), which may well be one of the most famous fashion photographs of all time.

With Avedon’s approach to fashion photography becoming fashionable itself, in the sixties he changed his approach and headed back to the studios using what became his trademark neutral background in order better highlight his subjects. The exhibition includes his iconic Beatles (1967) portraits, which became a major rock poster series and another famous picture from that era  “Andy Warhol and Members of the Factory, New York 1969”

Avedon accepted a commission in 1976 from Rolling Stone to photograph America’s power elite for the magazine’s special bicentennial edition. The sixty-nine photo series titled “The Family”  is a flashback for anyone who lived during those times. The exhibition also includes pictures from Avedon’s “In the American West” series as well as the controversial photos he took of his dying father.

Those lucky enough to be in Paris to see this show at the Jeu de Paume should not miss several videos where Avedon talks about his photographs. One of the most telling moments is a scene where Avedon meets one of his “American West” subjects Sarah Bennett who was a twelve year old freckled face country girl when he photographed her in Rocky Ford, Colorado (1980). Sitting in a diner discussing the picture with her years later we hear Avedon attempt to explain the photo. We are left along with Sarah to ponder how much of Avedon’s portraits are about the people being photographed and how much are about Avedon shaping and molding his subjects to correspond to his vision.