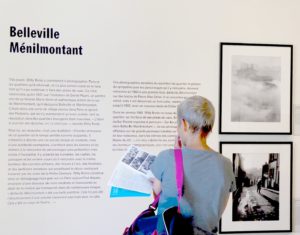 Black and white photography fans remember Willy Ronis (1910-2009) for his lyric post war photographs depicting working class Parisians of the Belleville and Ménilmontant neighborhoods. His photo book “Belleville Ménilmontant” is a beloved classic. Now, nearly a decade after his death, Ronis’ photographs are being exhibited back in Paris’ 20th arrondissement where many of the pictures were originally taken (at the Pavillon Carré de Baudouin until January 02, 2019).

Ronis poetic photographs helped create the humanist narrative that developed in France after WWII. But he was a committed communist and made no secret of his empathy for the working class and the world of work. His photographic style has been called  “poetics of engagement.” When covering the strikes at Citroën (1938) and Renault (1950), or reporting on the mines of Saint-Étienne (1958) or the textile industry in Alsace (around 1950), he denounced social injustice while emphasizing the dignity of the struggling people he photographed.

In 1953 Edward Steichen included Ronis along with Cartier-Bresson, Robert-Doisneau, Izis and Brassai in an exhibition at the Museum of Modern Art titled “Five French Photographers.” In 1955, he was included in the legendary “Family of Man” exhibition.

The Pavillon Carré de Baudouin —where the photos are being exhibited—is a cultural center which hosts free exhibitions and cultural activities run by the town hall of the 20th arrondissement.