Leafing through a book behind a pillar in the American Library in Paris, mystery writer Cara Black seemed herself a bit of a private investigator uncovering clues far from the prying eyes of the crowd. Moments later she would give a presentation on her inspiration, her research, and the development of her much-abused yet still youthful protagonist Aimée Leduc, the hero of her thirteen mystery novels all set in Paris. And from talking with Black about her craft, it becomes clear that she puts together books the way Aimee Leduc uncovers mysteries.

“My stories come from place and setting,” she says before relating what has now, after thirteen books in the enormously successful Aimée Leduc series, become something of a ritual for her – the yearly hunt for the next perfect Paris scene. “I go to places like the Marais, like the Clichy, and try to find those spectacular areas a little off the beaten path that Paris is famous for, the places that you have to search a little bit to get to. And when I find them, that’s where the stories start.” Black has made Paris her literary bread and butter, with each of her mysteries tackling the sights, sounds, and textures of a different Parisian arrondissement.

But far from being assembly line products, the books in the Aimée Leduc series are all painstakingly researched, having been lauded by audiences and critics alike for their attention to detail and their quirky originality. “Paris is an unforgiving muse,” says Black, “because when one writes about Paris, there’s no room for error.”  Paris has always been a bit of a literary double-edged sword, with a well-known tradition of expat writers offering their personal takes on the city. 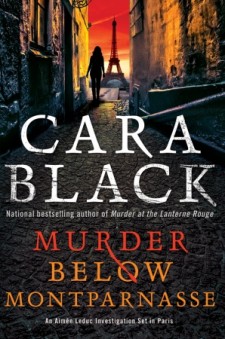 The success of such English-language luminaries as George Orwell and Ernest Hemingway in famously evoking the city makes it a difficult task for any writer to tackle. Black is undaunted, however, explaining the relaxed perspective she brings to her writing. “It was Benjamin Franklin who said that all Americans have two countries: America and France,” she begins.  “When I first started it was clear to me that I couldn’t write as a Frenchwoman – I can’t even tie my scarf like a Frenchwoman – but that I could write as an outsider.” So Black created a character that is a modest fantasy for any American infatuated with Paris – her heroine, Aimée Leduc, is not wholly Parisian but half-American and half-French, and her job is to wander the streets of Paris searching for clues. But best of all, Black gushes, “she lives in a fabulous apartment on the Ile-St-Louis.”

Black herself clearly envies the life she has created for Aimée Leduc. Her own life, however, is not so far away from that of her heroine’s. As research is key to the success of her books, Black makes frequent trips to Paris to soak up the atmosphere, follow-up on promising leads, and interview anyone she can find – from prostitutes to river workers – that can offer her a glimpse into what really goes on in the dark corners of the city. And Black seemingly has no intention of stopping anytime soon. When asked after her presentation how long she intends to write about Paris for, she answers quickly, rolling her eyes with mock exasperation, “I’ve only got fifteen arrondissements left to go.”