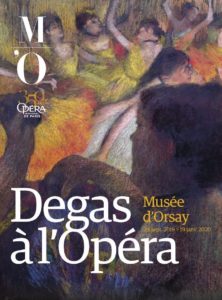 For the Paris Opera’s 350th anniversary the Musée d’Orsay features the exhibition ‘Degas at the Opera,’ co-organized with the National Gallery of Art in Washington DCs, showing paintings, drawings, sculptures and pastels by the artist, including iconic works such as The Little Fourteen-Year-Old Dancer, Foyer de la Danse or La Loge  (to January 19, 2020).

The Paris Opera was founded by Louis XIV (who was an enthusiastic dancer himself) in 1669. He was known as “The Sun King” because of a ballet role he performed at the age of 14, where he represented the rising sun.

Degas started painting scenes from the Opera as early as 1860, fifteen years before the inauguration of the Palais Garnier. Many of his paintings show dancers backstage or in rehearsal, emphasizing their status as professionals doing a job. From 1870 Degas increasingly painted ballet subjects, partly because they sold well and provided him with needed income.

The exhibition includes approximately 100 of the artist’s best-known and beloved works depicting opera life both on and off stage.