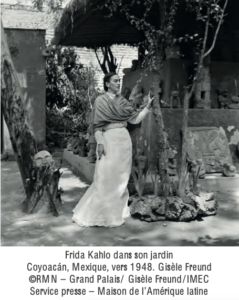 Gisèle Freund’s 1933 photograph of Andre Malraux on a Paris rooftop wearing a trench coat with a cigarette dangling from his mouth is one of her most iconic pictures. It was one of many portraits she took documenting the Paris literati after fleeing Nazi Germany in the 1930’s. But in 1941 she had to flee again. This time from France to Buenos Aires. An exhibition “Ce Sud Si Lointain,” at the Maison de l’amérique latine featuring Gisèle Freund’s Latin American photographs, is an opportunity to discover another chapter in the life of this remarkable journalist-socialogist-photographer (until January 07, 2023).

With the help of Malraux and Victoria Ocampo (publisher of the Argentinian literary magazine “Sur)” Freund escaped Nazi occupied France to Buenos Aires where she got work with “La Nacion” newspaper and (with Ocampo’s help) connected with the Argentine intellectual and cultural milieu photographing such people as Jorge Luis Borges, Adolfo Bioy Casares and Maria Rosa Oliver. The exhibition (72 photographs) features some of her pioneering work using early color slide film, photos of Latin American cultural celebrities and scenes depicting daily life.

From 1941 to 1954 she traveled across Latin America reporting for “El Hogar,” “Novedades” “Time” and Magnum photo agency. In Mexico she photographed such luminaries as Freida Kahlo, Diego Rivera and Dolores del Rio. Her controversial 1950 photos for “Life” magazine of Eva Peron capped off her Argentina years.

The name of the show “Ce Sud Si Lointain” (In the oh-so-distant south) is from a poem by Luis Cernuda.