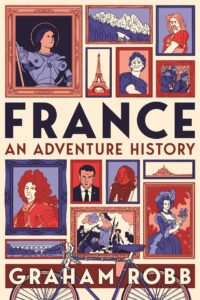 History adventure… an oxymoron? Well, maybe for those who have suffered through history classes in school with a bunch of boring facts and dates. But for Graham Robb, author of “France: An Adventure History,” revisiting bygones is a fascinating adventure full of surprises.

Graham Robb’s new book (winner of the American Library in Paris Book Award) is a profoundly original and endlessly entertaining history of France, from the first century BC to the present day. It is based on countless new discoveries and thirty years of exploring France on foot, by bicycle… and in the library.

Beginning with the Roman army’s first recorded encounter with the Gauls and ending with the Gilets Jaunes protests in the era of Emmanuel Macron, each chapter is an adventure in its own right. Along the way, readers encounter the usual faces, events and themes of French history… Louis XIV, the French Revolution, the French Résistance, etc. But here they are woven into a lively tapestry making this “adventure history” a real page-turner.

Robb’s 2007 book “The Discovery of France” won both the Duff Cooper and Royal Society of Literature Ondaatje Prizes. For his book “Parisians” the city of Paris awarded him the Medal of the City of Paris.