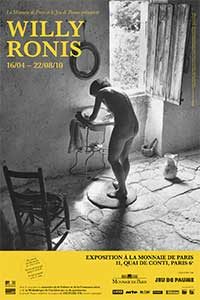 Paris pays homage to French humanist photographer Willy Ronis  with an overview exhibition of his work at La Monnaie de Paris. The photographer, who died recently would have turned 100 this year. He  was the last of a generation of post-war photographers whose poetic black and white photographs immortalized the city. During the fifties he was included in two legendary exhibitions “Five French Photographers” at the New York Museum of Modern Art, which included Cartier-Bresson, Doisneau, Brassaï and Izis and “The Family of Man.”

This exhibition of 150 photographs includes both well-known pictures such as “le nu provencal” showing his wife Marie-Anne Lansiaux in front of her sink and lesser known “politically engaged” photos taken during the 1930’s as well as some classics taken by Ronis for his book on Belleville-Ménilmontan.