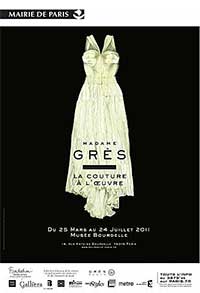 Paris loves to put on a great show. And what better way to show off French savoir-faire than by providing visitors to the French Capital a glimpse of its illustrious High Fashion tradition. Palais Galliera is kicking off its new season with a glorious exhibition honoring Madame Gres housed at the Musee Bourdelle through July 24, 2011. The museum, situated in the vicinity of the Montparnasse Tower, is the former atelier of Antoine Bourdelle, a former student of Rodin. Its rooms and courtyard are chocked full of massive bronze statues and equestrian figures, busts and reliefs. So, you might wonder, what does a sculptor museum have in common with a high fashion designer?

“I always wanted to be a sculptor,” the late couturier once expressed. “For me, whether using fabric or stone, the work is the same.”  It is not surprising that Madame’s garments, with its intricate pin tucks and sensual drapery about the body, inspired by ancient Grecian sculpture –flawlessly blend in with the surrounding artwork. In fact, upon entering the “Salle des Platres,” a single ivory silk jersey gown is practically undistinguishable when set within stone walls and plaster reliefs of the same colour. A study of grey and daywear takes its righteous place in from of the iron reliefs in the Portzampark wing. In other rooms, the sculptural effect of fluid jerseys wrapped around dress forms perched atop sculpture stands suggest works of art in progress, much like the studies of plaster busts,  ironwork statuettes and other objets d’art set about what was once an artist’s atelier. What is remarkable is how a symphony of white silk jersey draped gowns in the Salle Beethoven appears so new, so fresh as though they had just stepped off the runway. A classic look triumphs in timeless elegance.

Revered by her contemporaries as a master of couture, Germaine Krebs, born in 1903, partnered with Alix Barton and opened a couture house in 1932 which became known simply as “Alix.” Responsible for designing the toiles, Germaine experimented with “new textures” including that of silk jersey, mohair, nylon crinoline and silk ciré. It was the “art of the drape” which created a name for the couturier. Later, in 1941, she opened her own couture house under the name “Grès” (an anagrams taken from the name of her husband (a painter).

In 1941, with World War II raging on, Grès dared to present collections of colors in red, white and blue as a way of intimidating the German authorities. She was shut down briefly but reopened in 1942. Guided by her incessant desire to work as a sculptress, Grès developed a veritable science around the drape. Inspired by the peplum from ancient Greek sculpture, and guided by her knowledge of handling wide widths of silk jersey, Mme. Grès created a special style of pin pleating which she then stitched in place. Though she also created coats, dresses and suits and worked with silk faille or taffeta in billowing silhouettes, it was her signature evening gowns with miles of jersey, painstakingly sculpted with miniscule pleats for which she is most famous.

The Mme. Grès exhibit consists of 80 garments dating from the 1930’s through the 1980’s originating from the Palais Galliera’s private collection. In addition there are 50 original prints from iconic photographers like Avedon, Horst P. Horst, Wally Maywald, Guy Bourdin and others. Jewelry designed for Grès is sporadically mixed in with other small artwork (including a silver pond lily necklace designed by Robert Goosens for Grès and jewelry created by the couturier herself for Cartier along with a hundred or so priceless croquis sketches donated by the Fondation Pierre Bergé-Yves Saint Laurent.

The exhibition is not only a pleasant connection between the worlds of fine arts and fashion,  it is also a great way of discovering one of Paris’ lesser known art museums.