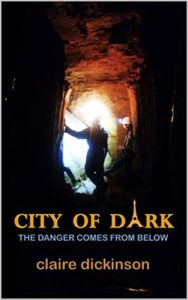 How safe is a city built on a void? Hundreds of kilometers of abandoned quarry tunnels snake under huge parts of Paris.  It is illegal to penetrate the city’s’ underground world, yet every year thousands of subterranean explorers do just that.  Drawing on Paris’ underground urban legends, Canadian author and long-time Paris resident, Claire Dickinson dares us to imagine —with her new book “City of Dark”— what would happen if that world were taken over by terrorists.

The story starts in the midst of a sweltering heatwave, when the Prime Minister is assassinated at Val-de-Grace military hospital.  As the link to the catacombs crystallizes the top inspector on the counter-terror squad teams up with a foreign engineering student who enlightens him on the world below the city.  Not only does the student have intricate knowledge of the underground layout, she also knows all the myths and legends that will provide deeper insight into the case.

The question is:  will her knowledge of the tunnels below ground be enough to stop the mayhem above?

“City of Dark” is a thriller that draws on the Zeitgeist of political irresponsibility and impunity.  Yet not only does the story provide a twisted adventure through contemporary politics and fake news, it will also take you on a stroll through the City of Light’s less well-known spaces, highlighting Dickinson’s love of her adoptive home. The chapters are packed with anecdotes providing a new take on the city. But most importantly, the book will keep you guessing until the last page.