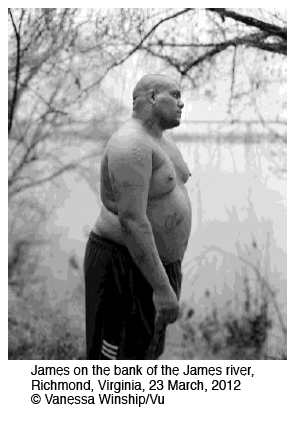 “She Dances on Jackson” is the title of Vanessa Winship’s new exhibition of black and white photographs at the Fondation Henri Cartier Bresson in Paris (until July 28). Winship won the 2011 Henri Cartier Bresson Award with 30,000 euros allowing her to travel across the United States, from California to Virginia, New Mexico to Montana to photograph the fabled ‘American dream.’ The exhibition of photos resulting from this trip present a lyrical conversation between landscape and portraits of the people that inhabit it.

The photos are in the documentary tradition and recall such masters as Walker Evans, Paul Strand and Robert Adams. Stylistically similar to her previous work using black and white film and a large format camera, Winship’s portraits remain arresting and unnerving but this body of work reveals her to also be a skilled landscape photographer. Commenting on her use of film in a digital world she said “I recall once being asked why I still used a darkroom, this outmoded means of working… As I enter that pitch black space it becomes a place of silence, a place to reflect on what has been and perhaps what’s to come, but it is also this place of blindness where I must tune more finely my senses to fully appreciate what I have.”

Winship lived for the past ten years in Eastern Europe, the Balkans and Turkey. She is a member of the French agency “Vu. Says Winship «I lived and worked in the region of the Balkans, Turkey and the Caucasus for more than a decade. My work, focuses on the junction between chronicle and fiction, exploring ideas around concepts of borders, land, memory, desire, identity and history…”

Her America photos are striking in how they too inhabit that poetic place “between chronicle and fiction.” They are as much about the photographer’s experience of discovering America as the place itself.  Along with some stunning photos the exhibition includes a kind of “scrapbook” with notes and fragments of emails sent during the trip providing some context for the pictures. In her notes she observes “It’s not about here of course it’s about me and my own personal struggles.”

The title of the exhibition “She Dances on Jackson” suggests the personal nature of the work in that it refers to a photo not taken when she was walking on Jackson street in Chicago. The exhibition begins with a Proustian-like description of some street musicians and a girl inspired to dance to their music while waiting for a train. Says Winship “How we grieve the loss of those images we didn’t make… though in recent years I begin to cherish those almost as much as the ones I actually do make.”