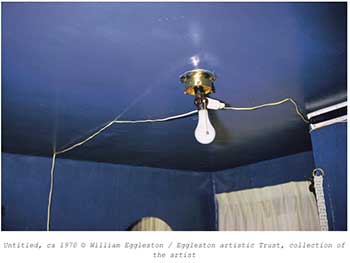 Eggleston along with such photographers as Stephen Shore is credited with increasing the recognition of color photography as a legitimate artistic medium to display in art galleries. His solo exhibition at MoMA in 1976 is considered a watershed moment in the history of photography.  He paved the way for other contemporary photographers such as Martin Parr, Nan Goldin and Jeff Wall. But at the time some critics hated the MoMA show. A New York Times art critic called Eggleston’s pictures banal and boring with “dismal figures inhabiting a commonplace world of little visual interest.”

First photographing in black-and-white, Eggleston began experimenting with color in 1965. He says his early influences include Robert Frank and Henri Cartier Bresson’s book “The Decisive Moment.” About the book Eggleston said it was “the first serious book I found, from many awful books… I didn’t understand it a bit, and then it sank in, and I realized, my God, this is a great one.”

The Memphis photographer went on to create a new “Post Modern-Post Bresson” aesthetic using what he calls a “democratic camera” where all subjects are of equal importance. Says Eggleston “I had this notion of what I called a democratic way of looking around, that nothing was more or less important.”  Eggleston’s mature work is characterized by its ordinary subject-matter. From street signs, to blue ceilings to discarded air-conditioners he sees beauty in the mundane. Says Eggelston  “You can take a good picture of anything. A bad one, too.”