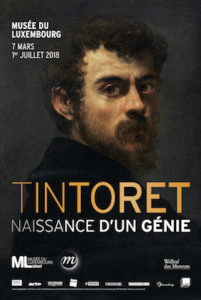 The Musée du Luxembourg marks the 500th anniversary of the birth of Venetian painter Jacopo Robusti —better known as Titntoretto—with an exhibition (Tintoret, Naissance d’un Génie) focusing on the first fifteen years of his career. The artist was born into a family of craftsmen. His father was a dyer (or tintore), hence the son got the nickname of Tintoretto, little dyer or dyer’s boy (to July 1st, 2018)

Tintoretto (1518-1594) with an innovative style and dazzling technique is considered a star among  late Renaissance painters. In 1538 —just turning twenty— he was already an independent master with his own studio. The exhibition opens with a self portrait depicting the artist as a young man and includes his earliest known work the “Adoration of the Magi.”

“Naissance d’un Génie” recalls the artist’s strategies to attract a cultivated and influential clientele that would bring him important commissions depicting religious scenes for churches and civic buildings. The exhibition revisits the diversity of an ambitious young artist via religious and secular paintings, some rapidly executed small works, portraits of important Venetians as well as close friends and drawings.