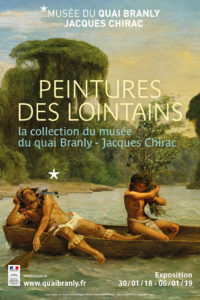 The Musée du Quai Branly-Jacques Chirac museum specializes in indigenous art and cultures of Africa, Asia, Oceania and the Americas. It opened in 2006 and is the newest of Paris’ major museums. A temporary exhibition at the museum “Peintures des Lointains” —looks at painters’ fascination with exotic people and places. It is the first time the museum has featured paintings from its vast collection of 450.000 objects . The painting exhibition includes mostly 19th century work from Ange Tissier’s “Odalisque” to daily life in Cairo by Emile Bernard to George Caitlin depictions of native Americans in the old west to Gauguin’s Tahiti.

The Branly Museum is part of France’s colonial legacy with work gathered by its explorers, missionaries and ethnologists. The museum combines collections from the National Museum of the Arts of Africa and Oceania— originally created for the 1931 ”Exposition coloniale internationale”  — and  the Musée de l”Homme collection of 250,000 objects which had been created for the L’Exposition Universelle de 1937.