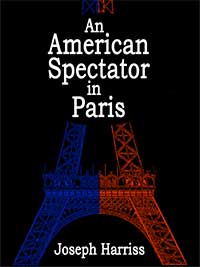 Politeness, friendliness, and formality at its most French —The French revel in their complications despite the frequent inconvenience of getting tangled in them. For one thing, it confirms their cherished impression that they are unique on earth, a blest condition known locally as the French Exception. For another, it makes everybody else jump through Gallic hoops to do things their way. Even Charles de Gaulle, who occasionally admitted to despising his compatriots as unworthy of his idea of France, asked in a moment of exasperation, “How can you govern a country with over 300 kinds of cheese?”

The complexities range far beyond mere varieties of dairy products. Take the normally simple question of automobile headlights. For decades, French ones were not white, like everywhere else, but yellow. “Much less blinding for oncoming cars,” was the official explanation why foreign visitors had to put yellow covers over their headlights at the border. Then France fell in line with worldwide standards and quietly switched to white. The yellow ones, it turned out, had been after all simply a gratuitous complication-although it did have a certain use as a xenophobic tool that made foreigners, always suspect, easily identifiable at night.

Visiting foreigners are also flummoxed by the labyrinth of French closing days before learning that Thursday is the best day to get things done. An unpredictable number of shops are closed on Monday, depending, maybe, on whether they were open Saturday. National museums shut tight on Tuesday, though an indeterminate number of private ones might just be open. Schools are out on Wednesday but in session on Saturday, neatly blocking any plans parents may have for weekend trips. And Friday? Well, that obviously is the beginning of the weekend in a nation with a 35-hour workweek, so your best bet on Friday is just to try a new sidewalk cafe.

Then there is the problem of what to call an unmarried woman. Anyone with a rudimentary familiarity with French knows that the proper term, from time immemorial, is mademoiselle. Mais non! Many single Frenchwomen, especially those in business or of a mature age, now consider that condescending or sexist. Perhaps borrowing a page from their American feminist sisters, they are adamant about being called madame. The law is no help, being tactfully unclear on that point, while traditionalist notary publics insist that official documents use mademoiselle for unmarried women, executives or not. Then there is the theater, where actresses are uniformly called mademoiselle, even if they are icons like Jeanne Moreau or Catherine Deneuve.

Such pettifoggery is all very confusing, not to say annoying, for those of us who consider simplicity a virtue that lets us get on with more important matters. But of all the complications of French life, none is more perplexing — to foreigners and French alike — than when to use the familiar tu or polite vous form of address. The delicate, often embarrassing question of when to tutoyer a Frenchman is a problem fraught with social peril where one gingerly tiptoes on linguistic eggshells. There are no fixed rules for guidance. Make a mistake and you can become an instant boor, make an enemy, or create a more intimate relationship than you intended. It’s enough to make one nostalgic for the proto-Taliban of the French Revolution. True, they made somewhat excessive use of the guillotine, but at least they decreed that all citizens, being equal, would henceforth use tu in addressing each other.

Alas, that good and useful rule fell by the wayside as the 19th-century bourgeoisie replaced the aristocracy and sought genteel status by using vous in clannish ways that only they could understand. That left most speakers of French insecure, with nothing to go on but fallible instinct and feel. When they can’t figure out which form to use, they have to fall back on turns of phrase, often awkward, that avoid addressing their interlocutor directly. That, of course, can only be a stopgap measure.

IT HAPPENED TO ME RECENTLY when my French sister-in-law came for a visit after a long absence. For the life of me, I couldn’t remember whether we had previously used tu or vous. I had to rely on increasingly gauche circumlocution until I could discreetly query my wife about it. “Oh, I’ve never used tu with her husband and she won’t with you, so go with vous,” came the reply. This, despite long being on family terms with the lady.

As one French linguist, Claude Duneton, explains, “All you have to go by are more or less changing usages. There is no rationale to it, and the possible combinations of what form to use in which situation are infinite, depending on the moment at hand and your individual inclination. That’s one of the charms of our language.” Especially charming, it seems, in certain situations. As Duneton points out, “During intimate moments, the sudden change from vous to tu can deliciously increase eroticism.” (So that is what the bluestocking bourgeoisie has been up to?) Which recalls the old cartoon of two American tourists chatting in a Paris cafe. “And then the most wonderful thing happened,” one girl says dreamily to the other. “He switched from the polite to the familiar.”

But even in France there are sometimes other things to do, like working. And in the office, linguistic confusion generally reigns as everyone tries to sort out how to address each other. In some companies underlings use the respectful vous with their superiors, who themselves use the familiar — and condescending — tu with them. To avoid this, many French firms, especially those in fields contaminated by American mores such as advertising and hi-tech, are trying to loosen up the stiff old hierarchical structures by making the tutoiement permissible, or even obligatory, along with open-neck shirts and casual Friday. Jacques Seguela, vice president of a big Paris advertising firm, never uses any form but tu. “It’s more direct, affirmative and cordial,” he explains. “It creates an atmosphere of complicity.”

But the idea of using the familiar form with someone older or higher placed in the socioeconomic pecking order disturbs France’s old feudal reflexes. (Paradoxically, the French say tu to God but vous to the boss.) It leads some to mutter darkly about pernicious foreign contagion. Complaining of today’s “galloping tutoiement,” Le Figaro attributes this sorry state of affairs to “the influence of Anglo-Saxon manners and an egalitarian vision of society.” One linguist, Jacques Durand, observes sadly that the disappearing vous is another bad sign of leveling in French society. “Some people are even calling each other by their first names,” he notes with a certain refined repugnance.

Thus contradictions and hypocrisy abound. Dignified chaps like members of the august French Academy say vous to each other while at the domed Institut de France, home of the Academie Francaise, even if they have known each other since childhood. Then they switch to tu once they doff their bicorne hats and step outside into the real world.

One group that staunchly holds out against creeping linguistic Americanization is the 20,000 or so families that belong to the former feudal aristocracy and today’s haute bourgeoisie. Here the second person plural among themselves is de rigueur. Their main object in life is keeping up appearances and transmitting inheritances; the affected vous means everyone knows his place, stays within his own class, respects the hierarchy — and keeps everybody else at arm’s length.

This can take bizarre forms. I know one family where Madame, proud bearer of “one of the best names in France,” as she says, uses the distant vous with her children until they obtain their high school diploma. Then, as a treat, she uses tu with them. All the while, the children have been using tu with her. There is also the case of my good friends Jean-Pierre and Marie-Louise. We have known each other for a quarter-century but we still use vous, although they use the familiar with other friends (but vous with their son). I gave up long ago trying to arrive at a rational basis for our verbal relationship.

BUT THOSE SLY MANIPULATORS of the spoken word, politicians, are the greatest virtuosos of the tu-vous conundrum. Among the members of the Communist and Socialist parties, the familiar form is obligatory, reflecting true Marxist comradeship. With conservatives it’s more complicated. Jacques Chirac, while president, used the familiar with his longtime political pals but they replied respectfully with vous. At one point he said tu to his minister of the interior, Nicolas Sarkozy, but vous to Dominique de Villepin, his prime minister, who in turn said vous to Sarkozy.

Since becoming president, Sarkozy has become adept at manipulating journalists by using tu with them whether they like it or not, the equivalent of George Bush’s nicknames. “He makes it hard for me to keep him at the necessary distance to maintain journalistic objectivity,” says one newsman at Le Monde. “He draws us into a closer relationship than we want when trying to cover the Elysee Palace.”

Still, it might be a good sign if ordinary citizens start using tu with him. As one sociologist explains the typical subservient French attitude toward the powers that be, “We use vous with the president because we’re actually still living in a monarchy and you have to respect the king.” Now if Frenchmen begin treating Sarkozy as a citizen-president instead of a monarch, we will know that France is indeed venturing into the terrain — itself complicated enough — of 21st-century democracy.

About the Author
Joseph A. Harriss is The American Spectator’s Paris correspondent. His latest book, An American Spectator in Paris, will be released this fall. Book info: //www.unlimitedpublishing.com/amspec/