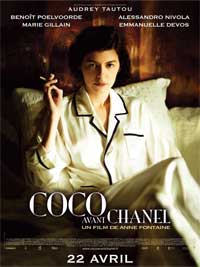 The Paris buzz this week is all about Anne Fontaine’s new film “Coco Avant Chanel” starring a perfect for the part Audrey Tautou. Based on a Chanel biography “l”Irreguliere” (The Nonconformist) by Edmonde Charles-Roux, the film (in French) tells the tale of the designer’s early years and her remarkable rise to fame and fortune.

A film that would do justice to the entire life of this amazing woman could possibly take days to see, so we just have to wait for part two. She was born to a humble family, and after the death of her mother spent her youth in an orphanage, where she learned to sew. Ambitious and determined, she soon realized that men could be exploited. She sought out wealthy and powerful men who could provide the money and protection essential to gratify her social and creative needs. Her first boyfriend set her up in a hat shop, but it was an Englishman, Arthur “Boy” Capel, who took her to Paris, gave her a taste for the high life, and backed her when she wanted to open a millinery shop in Deauville.

“Genius is the ability to foresee the future,” Coco Chanel often said. But even Mademoiselle, as she was often called, could never have imagined that  years after her death, her small boutique at 31, rue Cambon would be the nucleus of a multinational business including a network of stores around the globe. One of the best known fashion names of the century, Chanel is unique. It is the only house that has remained faithful to the spirit of its namesake well after the founder’s death, without compromising the original image.

Suits, watches, bags marked with golden intertwining double C’s, perfume inscribed with the number five – all have remained on the hit-parade of best-selling luxury items around the world. Just how has this house survived the death of its founder, a woman who admitted to doing business without being a businesswoman?

Since 1924, the mysterious Wertheimer family guaranteed its continuity. Pierre Wertheimer, owner of Bourjois Cosmetics, collaborated with Chanel to form a perfume company in 1924. Thirty years later, Wertheimer bought the couture house, which his son Jacques inherited in 1965. By 1974, business was stagnating, till 25-year-old Alain ousted his father and took the reins. The brand owes much of its current success to this young French millionaire, whom Fortune magazine credits with the 30th largest fortune in Europe.

Another key element is the talent, taste and charm of Karl Lagerfeld, who in 1983 took over as designer at what was essentially a dowdy house, and gave it what Mademoiselle never did: a sense of humor. Lagerfeld hiked up skirts, introduced denim, pulled on leggings, pulled in jackets, found a thousand different ways to reinterpret the house’s icons and archives and took the double C insignia places it had never been before. Lagerfeld, who is the art director of the house of Chanel, surpervised the re-creation of  the costumes  and accessories for the  “Coco Avant Chanel” film.

Though there have been Chanel collections with items that made a few bourgeois women wince – Chanel pasties worn with oversized jeans, moon boots, baseball caps, sneakers, G-strings under dresses cut to the crotch – in an odd way, Lagerfeld has remained faithful to the spirit of Mademoiselle. Rebelling against ostentatious clothes at the turn of the century, Gabrielle Chanel was the first designer to incorporate “street style” into high fashion, borrowing sailor pants and cardigans from menswear. She is also credited with making fashionable such varied styles as tweed suits, jersey, short hair, suntans and costume jewelry.

Chanel focused her efforts on the world of high fashion, and introduced comfort, ease and practicality in clothes – concepts totally foreign to fashion at the time. Soon she opened a dress shop in Paris, but closed it at the onset of World War I. After the war, Capel was killed in a car crash. Though grief-stricken, Chanel concentrated her efforts as a designer, and was awarded with fame, wealth and importance. By 1928 she had launched her couture house at 31, rue Cambon. She was a major figure in fashion until the eve of World War II. By 1930, her annual turnover was 120 million old francs and she was said to have over £3 million on deposit in London banks. Her success was based on the simple observation, made very early in her career, that what she liked for herself would appeal to other women.

In 1954, at age 71, after years of Swiss retirement, Coco Chanel reopened her house. Heckled at first by the European press as someone out of touch with modern times, she regained her place in the world of style when her ladylike dresses became best sellers, particularly with Americans. At her death in 1971, her assistants, Yvonne Dudel and Jean Cazaubon, took over the direction of the house. Chanel Boutique was launched in 1976. The clothes were designed by Philippe Guibourgé until the German-born Lagerfeld arrived. In the years since Lagerfeld has ruled the house, he has become the most important maker and shaker in the world of French fashion.

Coco Chanel believed that “fashion doesn’t exist until it goes down into the streets.” Though she might be taken aback by some of Lagerfeld’s wild interpretations of her classic style, still she’d be pleased to see that the house she founded many years ago has maintained its status as France’s premiere monument of style.