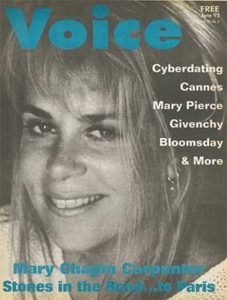 Next month French haute couture will lose one of its few remaining giants. The towering (6 foot, 6 inch) Hubert de Givenchy will take a final bow after his couture collection, then retire from a world he has gracefully dominated for more than 40 years. A perfectionist in cut and silhouette with impeccable taste impervious to radical changes in style, Givenchy is part of the old school of fashion, which believes first and foremost that clothes should beautify the woman. Having dressed many of the world’s most elegant women, including Jacqueline Kennedy, the Duchess of Windsor, Princess Grace and Audrey Hepburn, Givenchy is recognized by industry professionals, including his colleagues, as one of the world’s greatest designers.

Though he has been criticized for doggedly clinging to his signature look – suits and jackets with square shoulders, graceful, knee-length ladylike dresses and grand, aristocratic ball gowns – during fashion’s wild and crazy metamorphosis, Givenchy’s design influence has withstood the test of time. After chaotic years of androgynous clothes, intellectual dressing, sloppy grunge and trashy vamps, many of today’s designers have retreated to a more elegant look that has been omnipresent throughout this couturier’s career. “A dress must be like a breath of air, giving the impression that it has just been put on. It should follow the movements of the wearer,” Givenchy insists. “I want fashion to be beautiful and lively.” He continues, “With haute couture, we are like plastic surgeons. We smooth over the bad points, refine the silhouette. In some ways we are also like magicians in that we create an illusion of beauty.”

Every day, the designer arrives promptly at 7am for work. He wears a white smock, his silver hair neatly brushed back. “I love to hear the house come alive each morning,” he enthuses. With music creating a background ambiance, he begins work by sketching and planning his daily schedule. While preparing his twice-yearly couture collections, Givenchy is incommunicado, completely losing himself in work. For hours on end, his models walk, stand and sit while he discusses patterns and sends the muslin prototypes back to the workroom for alterations before the ideas cool. “It is still a pleasure to see a dress come to life on a woman’s body,” he says with the same enthusiasm he had as a child rambling all over his grandparents’ house.

Born into an aristocratic family in Beauvais, north of Paris, Givenchy was raised by his mother and her parents after his father, a pilot, died in a plane crash. As early as 7, he recalls, he was designing imaginary dresses for celebrities featured in magazines. His grandfather, a student of Corot, was director of the Manufacture de Beauvais tapestry works; he collected precious art objects and rare textiles. Every armoire and chest in the house revealed a treasure of antique fabrics and decorative items. Together with his grandmother, the young Hubert would gaze in awe at the fabrics, trying to imagine who once owned them and how they were used. From this early experience, Givenchy developed a taste for and sensitivity to sumptuous textiles and art. In 1937, the family made a trip to the capital to see the Paris Exposition. At a time when Europe was slowly erupting into war, the French had created a dazzling environment reflecting their fantasies of world trade and peace. The 10-year-old boy was attracted to the Pavillon d’Elegance, a grotto with pink plaster walls housing a fashion exhibition with flamboyantly dressed mannequins representing the high fashion designers of the times.

After the Liberation, Givenchy first bowed to his family’s expectations and began studies in law. But a passion for fashion induced him to drop out and head for Paris. In 1945, he enrolled at the Ecole des Beaux-Arts and began an apprenticeship with the house of Jacques Fath. The postwar era saw Paris sparkling with the excitement of adjustment and reformation. Unheated cafés and restaurants were warmed by lively debates on politics, existentialism, future trends for the nation, the world, politicians, scientists, artists. The fashion world was bubbling over with Dior’s revolutionary “New Look.” This trend, with its wasp waists, padded busts and extremely full skirts, and all of the controversy surrounding it, put the house of Dior on the map. Dior, however, soon became the victim of his own success. Each collection had to be more grandiose, more complicated, more boned, padded, stuffed with more and more petticoats. Givenchy, who was working for the avant-garde couturier Schiaparelli, began exploring a simpler direction, devising tops, skirts and jackets that could be worn together or in a variety of combinations. Everything was uncomplicated, supple, lean and very young.

Aided by a top model, Bettina Graziani, who also worked as his publicist and saleswoman, and a close friend, Hélène Bouilloux-Laffont, who offered moral and financial support, Givenchy founded his own couture house in early 1952. With limited funds for fabrics, the young designer cut most of the clothes from the same white percale and put them on the best models in Paris. Customers could choose the silhouette they liked and then select the desired fabric. This novel idea won over much of the international press and buyers, who found everything fresh and exciting. On the first day of selling, Givenchy Couture was reported to have racked up 7 million francs. By age 25, Givenchy was one of the few couturiers to own his business outright, a status he enjoyed until he sold his house to LVMH in 1988.

Of all the celebrities who figured among Givenchy’s illustrious clientele, no one had such a profound impact as the legendary Audrey Hepburn. One day, Givenchy received word that he would be dressing “Miss Hepburn” for a Billy Wilder movie, “Sabrina.” A big fan of Katherine Hepburn, he was quite excited about the impending project. Much to his surprise, awaiting him in his salon was a frail young girl named Audrey, with short hair and no makeup, clad in gingham. Nevertheless, the charm of Hollywood’s newest star quickly won over the designer, who became so enthralled with her graceful, slim body and her long, swanlike neck, he adopted her as the symbol of his house. Each collection seemed to have been designed just for Audrey. His perfume “l’Interdit” was created expressly for her, in 1957.

The press and buyers, however, were not impressed by silhouettes designed for someone with such a gamine figure. Neither did they appreciate the strong, minimalist influence resulting from Givenchy’s friendship with Balenciaga, a couturier known for pure, simple lines. The 1955 winter collection provoked an outburst of unkind remarks, insults and other negative reactions. Some dresses were called “Balenciaga copies.” Others, cut with flat busts and low belted waistlines, were shunned. Still, for all of the contention, Givenchy’s “sack” dress was the latest rage by the mid-1950s. Other innovations that followed included the empire look and the “shift,” a popular style of the 1960s.

Givenchy dressed Audrey Hepburn for such movies as “Breakfast at Tiffany’s,” “Charade” and “Funny Face,” as well as for her personal life. “Givenchy’s friendship is something very precious to me,” the actress told journalists during an exposition held for her dear friend four years ago. “We’ve known each other for more than 30 years. He is always there for me, particularly during difficult moments. He came to New York when I received the Lincoln Center tribute. When my son was born, he came to see me and brought a christening gown with Spanish embroidery. And for my 60th birthday, he sent me 60 white rose bushes, which have just begun to blossom.” Their friendship lasted right up to her death in 1993. After a respectable amount of time had passed, Givenchy discreetly designed one last collection paying homage to his elegant friend.

Today “Givenchy” is more than a man creating made to order clothing for a privileged few. Part of the LVMH group, it is now a veritable empire of couture and ready-to-wear garments, perfume and cosmetics, menswear, articles for the home, and fine jewelry. Who will take over the reins after its founder leaves is anybody’s guess, though rumors point strongly to John Galliano, the British designer credited with the “elegance revival” of the ’90s. Assuming Givenchy doesn’t change his mind before the end of the year, when his contract expires, he will retreat to the 17th century manor he calls Le Jonchet. Bordered by fields and gardens, and surrounded by a tranquil moat, everything is as majestic as its owner. The interiors are decorated with an eclectic mix of contemporary paintings and rare antiques, chrome and glass tables and 18th century artifacts, all carefully balanced and in proportion.

Throughout his career, Givenchy has repeatedly said, “I’ve always wanted to create something that would not disappear with me but would outlive me for 50 or maybe 100 years.” He has indeed left an indelible mark on fashion. Like his mentor Balenciaga, he leaves behind a legacy, a great name that will surely outlive him for generations.